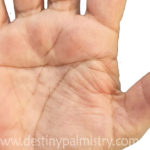 RIGHT HAND (OR DOMINANT HAND) WITH A SIMIAN LINE The right-hand Simian line has a slightly different meaning than having one on the left. By right hand, I do mean the dominant hand. So, if…